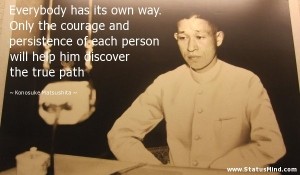 I first became acquainted the Matsushita (best pronounced Măt-sush-ta) companies back in 1996 when I negotiated a technology license with Matsushita Communications. Most people in America know these Japanese companies by the brand name, Panasonic. I didn’t know much about them at the time, but in my study since then I’ve discovered that their founder, Konosuke Matsushita, was perhaps the prototypical agile entrepreneur and lean startup guru. He never called groups scrums, but he employed the principles that are the foundation for what we call Agile today.

He started his company making electric sockets in 1917 with his wife, three friends, and 100 yen. The operations were in his small home with about 130 square feet (12 square meters) of working space. Being lean came naturally and out of necessity. He kept that philosophy throughout his life. In 1936 when his company was very large and successful, he wrote, “Any waste, even a sheet of paper, will increase the price of a product by that much.” This didn’t mean that he was averse to investing or spending where needed. He also said, “A policy of austerity will never bring prosperity.” He was a lean investor seeking efficiencies and the right products for his customers. By 1970, Matsushita Electric (MEI) was the most efficient large enterprise in Japan, more than Sony, Honda or Toyota.

Customers were always at the center of what the company did. Again from his 1936 report, “Treat the people you do business with as family.” New products were designed with close interaction with customers and resellers. He also said, “After-sales service is more important than assistance before sales. It is through such service that one gets permanent customers.”

Flexibility was another core principle at Matsushita. During a downturn in the economy he resisted layoffs, and sent unneeded manufacturing people out as salespeople. He relied on what he called trial and error, or what we’d call an iterative approach, to learn how the products and company should change over time. His biographer explained, “The challenge as he saw it was to create an increasingly large cadre of people who believed strongly in the company’s core precepts, but who otherwise were receptive and flexible.”

Collaboration was another key to his success. One of his managing directors, Mr. Ogawa, said, “He thought that without the cooperation of other people, he would not be able to achieve his goals. He always gave that impression to everyone he met. Without you, we would not be as successful.” When Mr. Ogawa had some problems with his division, Matsushita told him, “You’ve got four thousand superb employees working here. Talk it over with them, get their ideas, and come up with a reconstruction plan that will work.”

In his 1997 book, Matsushita Leadership, John Kotter concluded, “The mission-centered, customer-focused, high-productivity, employee-involved, and constantly improving MEI from the 1950s and ’60s may offer a far better role model than…well-known businesses [of that] time period or even today.” He lists the following actions that facilitated growth:

Agile principles have been around for a long time, and practiced by many before the Agile Manifesto was published. Konosuke Matsushita was one of the great agilists of all time. In my next posting, I’ll review his approach to strategy and leadership. 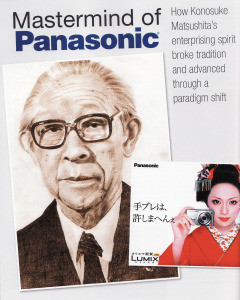